‘Spotting the Signs of Sepsis’:
Awareness film up now on NHS choices

The Health Innovation Network (HIN) has been working in partnership with NHS England and the ASK SNIFF Safety Netting Collaborative to produce the “Spotting the Signs of Sepsis” film series. 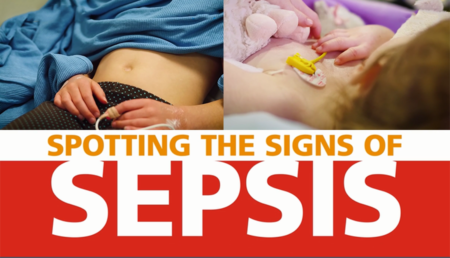 The film, which launched today on NHS Choices (www.nhs.uk/sepsis) and in south London Children’s Emergency Departments, features Dr Ranj, NHS doctor and TV presenter for This Morning and CBeebies. It has been designed to raise awareness of sepsis amongst parents of children under 5, as well as to standardise the information clinicians provide for parents of children with fever well enough to be cared for at home (often called safety netting advice).

The clinical content of the film is based on the Public Health England parental awareness campaign materials that were developed in collaboration with the UK Sepsis Trust and launched in December 2016.

The film is unique in its use of real life examples of the signs and symptoms of sepsis to empower parents to feel more confident about what signs to look for when their child is unwell with a fever at home, and to know when and how to seek medical advice. Our partnership with the ASK SNIFF Safety Netting Collaborative has ensured the film is evidence-based and has been co-designed with their Parent Panel.
Parents who watched the film within the Emergency Department will be able to refresh their memories by watching again at home via the NHS Choices website and primary care clinicians will also be able to signpost parents to watch the film online as part of their safety netting practice.

A second film in the series provides parents with practical and informative tips on caring for their child with fever at home.

Click here to watch the ‘Spotting the Signs of Sepsis’ NHS Choices film. It is currently being translated into more languages, which we hope to make available to Emergency Departments shortly.

Click here to watch the ‘Caring for Children with Fever at Home’ film, for parents of children with fever who are not showing any of the signs described in the first film.

If you are interested in showing the film to parents in your Emergency Department or would like more information about the project, please contact hin.southlondon@nhs.net or project lead, Dr Lauren Fraser, Darzi Fellow on the Patient Safety team, at lauren.fraser3@nhs.net.

In this edition, we caught up with Gabe Jones, Consultant in Emergency Medicine at St George’s Hospital and Director of Patientcheck.in which allows Patients provide simple clerking information and see their accurate waiting time on their smartphone, while they wait.

We try to make this as relevant to you as possible so please let us know if there is anything we have missed that you feel should be included. Covid-19 Specific Funding: New Future Fund To Support

Improving Outcomes for Patients in Community Care: Innovation at …

Making fitness fun for adults with learning disabilities in Green…

Celebrating Transgender Day of Visibility – find out why 100% o…

Over 100 clinicians to champion CVD Prevention in south London

What has working through a pandemic taught us about recruitment?