The Healthy Ageing team attended the 13th annual Dementia Congress in Brighton last month, and it was even more special than I had imagined it would be.

Wednesday opened with people with dementia and their carers from DEEP (Dementia Engagement and Empowerment Project) and Tide (Together in Dementia Everyday) sharing their unique experiences with us (and inspiring the title of this post). Alzheimer’s International took the stage and shone a light on how informal carers were providing 82 billion hours of support to people living with dementia by 2015, a statistic that still surprises me. This figure is why they believe that both formal and informal carers should be viewed as ‘essential partners in the planning and provision of care in all settings according to the needs and wishes of people with dementia.’

The lived experiences of people with dementia and their carers were weaved in throughout the congress as they spoke in the different break-out sessions on various topics including culture, assisted living arrangements, music therapy and spiritual support. One ‘End of Life Care’ session I attended hosted by Hospice UK and Dementia UK opened with a carer explaining why every day care matters to her, and how it maintains the dignity and individuality of a person living with dementia. Subsequently, a dementia care advocate, who has the condition herself shared some of the ways it has changed her life, and how the right care can enable her to live ‘interdependently’ (with support when needed, but a degree of independence remaining). Personally, I don’t think this session could have come at a better time, as my team is currently working on a project around end of life care in care homes. I left with a deeper understanding of why co-production is so important in our project work. 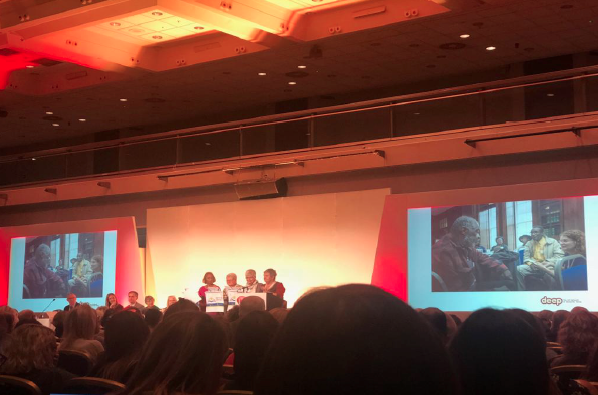 Finally, one of the many highlights of the congress was hearing Paola Barbarino from Alzheimer’s Disease International highlight the brilliant ways countries all over the world are supporting people living with dementia. Here were 3 of my favourite case studies:

‘In 2012, the Yellow Bracelet Project was initiated to encourage safety and prevent people with dementia getting lost. Yellow Bracelet has now become a symbol of affection, and continues to attract attention across society’. More here