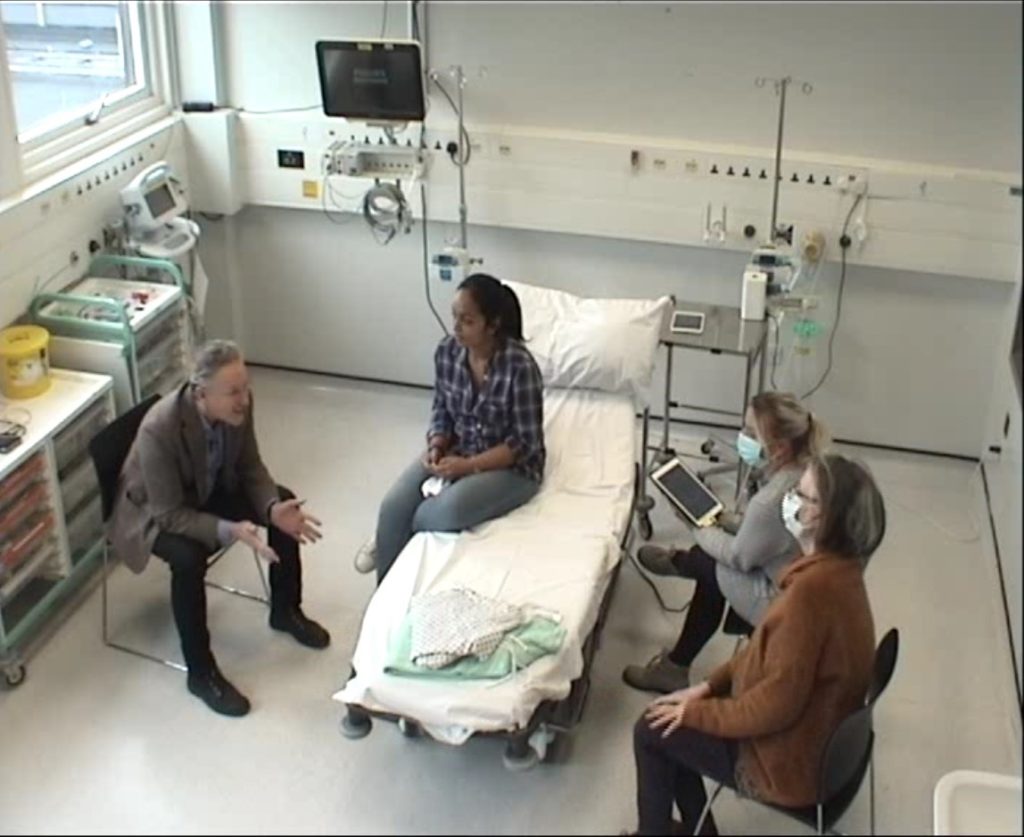 I was recently invited to participate in a digital simulation lab by my colleague, Dr James Woollard, Consultant Child and Adolescent Psychiatrist, Chief Clinical Information Officer at Oxleas and National Specialty Advisor in Digital at NHS England. The NHS has used simulation in clinical training for several years to provide a safe and controlled learning environment where clinicians can make mistakes and learn in real time without compromising patient safety, but whilst simulation labs are well evidenced in contexts such as medical training, they have not been used to support clinicians to develop skills in prescribing digital interventions to service users. This specific pilot was part of a project funded by a HIN innovation grant in 2019, and aimed to explore the value of simulation labs in supporting the adoption and spread of digital technologies within the NHS.

The simulation lab involved professional actors and clinicians simulating a clinical scenario in a mocked-up emergency department, in this case, the assessment of a 17 year old girl who had presented to A&E with her stepfather following an episode of self-harm. It took place at the simulation labs in St George’s Hospital and a simulation team were present to guide us through the process. Our task was to undertake a clinical assessment of the girl, played by an actor, and prescribe the “Calm Harm” app to her. We also had to discuss a care plan with both her and the actor playing her stepfather.

After an initial briefing, we spent some time preparing for the simulation. We thought about the concerns that might be raised and how we would address them. The developer of the App was also present to address any questions we might have and we were provided with a checklist of the areas that were important to address, such as the young person’s IT literacy and the functionality, efficacy and safety of the app. Following the group preparation and discussion, one clinician simulated the scenario with the actors, whilst the rest of us observed via screen and took notes. After we held a debrief where we reflected on what had gone well and areas we could improve on. Finally, the actors came out of character and gave feedback on their experience as the patient.

You would be forgiven for thinking that this all sounds like elaborate role play and, to be honest, that was my first thought. However, no roleplay I have ever done in my clinical training has ever come close to the same level of authenticity or richness of learning that the simulation lab did. It provided a real opportunity to safely practise new skills in an environment that was as close as possible to a real-life clinical setting, and as such felt much more valid than role play.

“Simulation labs provide a valuable learning opportunity for all clinicians to develop their knowledge, skills, and confidence in health technology.”

The value of simulation

But simulation has a role beyond patient scenarios. The NHS Long Term Plan emphasises the need for digital transformation in the NHS and invests millions in new technology every year, with a view to supporting clinicians to deliver more efficient and safe care in a timely way. Unfortunately, rollouts of new technology are complex and there is often a disconnect between user testing at the development stage and the application of the technology in a real-world clinical setting. Simulation labs provide an opportunity to bridge this gap by making it possible to identify, mitigate and manage problems early on. This could save

In addition, the Topol review rightly emphasised the need for clinicians to develop the knowledge and skills to prescribe apps and digital products. I was previously a Fellow on the Digital Pioneer Fellowship, but many clinicians lack knowledge or confidence to prescribe apps to service users and since there is currently no mandatory training provided to achieve this it is down to individual clinicians having an interest in digital technology to find training opportunities. This not only acts as a barrier to adoption and spread but creates inequalities in services. Simulation labs provide a valuable learning opportunity for all clinicians to develop their knowledge, skills, and confidence in health technology.

As a learning experience, the simulation lab has stayed with me and I have continued to reflect on what I learned in the weeks since participating. I have found that I am discussing apps more readily and confidently than before but am also more mindful about when to do this. One thing I learned from the simulation lab is that the service users are unlikely to be receptive to a conversation about new apps when they are in crisis or preoccupied with other concerns and could feel that their concerns are not being taken seriously. I look forward to attending further simulation labs and would hope to see these becoming more widely applied to digital health contexts in the future.

You can find out more about our Innovation Grants here, our other work in Mental health here or if you want support with an innovation of your own you can contact our Innovation team.