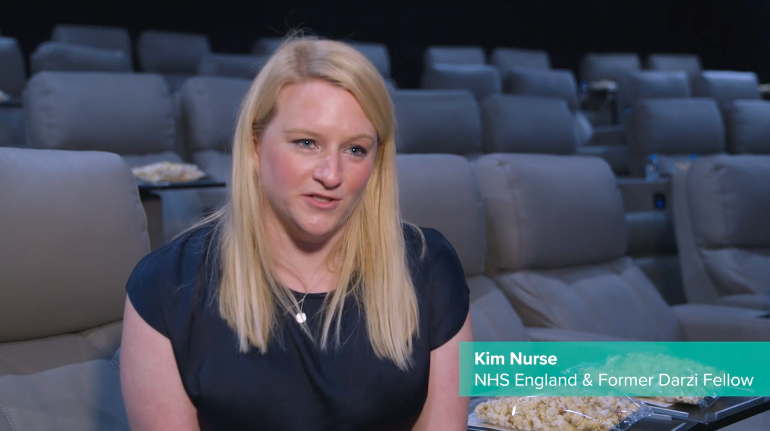 Homeward Bound, an innovative project in which patients, carers and clinicians from across Kingston Hospital Trust worked with local students to create short films that explain the transfer home process for patients who have had prolonged hospital stays, has confirmed it will begin showcasing two of the final films to patients, family and carers.

The Homeward Bound project, funded by the Health Innovation Network, brought together film students from the University of the Creative Arts, along with the hospital’s staff and volunteers, to create a series of original animated short films. The films explained some of the issues and practicalities involved in the discharge process from hospital back home, which can often be an anxious process for people who have experienced prolonged hospital stays. The films were then entered into a competition and the winning two films will now be shown to hundreds of patients and carers across the hospital and wider community as part of the patient discharge process.

Breid said: “We’re delighted to have supported this fantastic project that is a great example of real co-production in action; hospital staff working alongside students, carers and patients and everyone involved having an important and equal role to play.

“I think all involved should be incredibly proud of what they managed to achieve with the Homeward Bound project. Ultimately what these films will do is make the transition from hospital to home that bit easier for patients, families and their carers, at a what is a very difficult time in their lives.”

The second winning film, the People’s Choice, was voted on by patients and hospital staff online and was announced at the Kingston Hospital Improvement Seminar. Both winning films uniquely provide information to patients to feel more in control of their departure and return back home more quickly and comfortably.

Both films will soon be shown on television screens around the hospital and made available online too.

It is not often that an independent review for a UK Secretary of State gets held up for a book launch, but such is the case when you ask a world-eminent, California-based cardiologist to review the changes required in the NHS healthcare workforce to ensure preparation for the technological future.

Dr Eric Topol, probably best known for his book, The Patient will see you now, published his long awaited The Topol Review: Preparing the healthcare workforce to deliver the digital future last month. The report highlights how digital healthcare technologies have the potential to address the big healthcare challenges as well as tackle increasing costs. The report observes that innovation will “increasingly shift the balance of care in the NHS towards more centralised highly specialised care and decentralised less specialist care”. This shift in the pattern of need and services is aligned with much of the HIN’s work and our focus on out-of-hospital care. Flatteringly, Topol also supports the ambition that the UK has the potential to become a world leader in such healthcare innovations. This is particularly exciting to hear given the work the HIN has been doing locally with DigitalHealth.London building upon local strengths in clinical care, research, education and business to boost London as a world leader in digital health.

However, Topol also offers words of caution for those impatient for new digital healthcare technologies to reach their full potential. As he observed, “it can take up to 10 years to realise cost savings, investment in IT systems, hardware, software and connectivity, as well as the training of healthcare staff and the public”.  The potential benefits of genomics moving beyond rare diseases and cancers is a good example of this. Allowing better prevention and management of conditions that could reduce costs and disease burden in the 10 to 20 year timeframe will require the NHS to have completed the “digitisation and integration of health and care records if the full benefits of digital medicine (earlier diagnosis, personalised care and treatment) are going to be realised”.

Whilst much of the report focused on the longer-term revolutionary technologies, there was also an acknowledgement that some data-driven technologies can and are being deployed today. Particularly, those with the aim of improving ease of access or remote monitoring, designed to reduce unplanned hospital admissions and decrease non-attendance rates. This is an area that we see many solutions being developed by the innovators of the NHS Innovation and DigitalHealth.London Accelerator programmes. Companies like Transforming Systems and Dr Doctor use data to improve access and system efficiency, and companies like Lumeon and Health Navigator helping improve individual patient pathways. Topol is also refreshingly realistic about the issues we see many innovators face because of “uneven NHS data quality, gaps in information governance and lack of expertise”. Potential enablers to overcome the barriers to adoption, he suggests, include: an information governance framework, and guidance to support the evaluation, and purchasing of AI products. 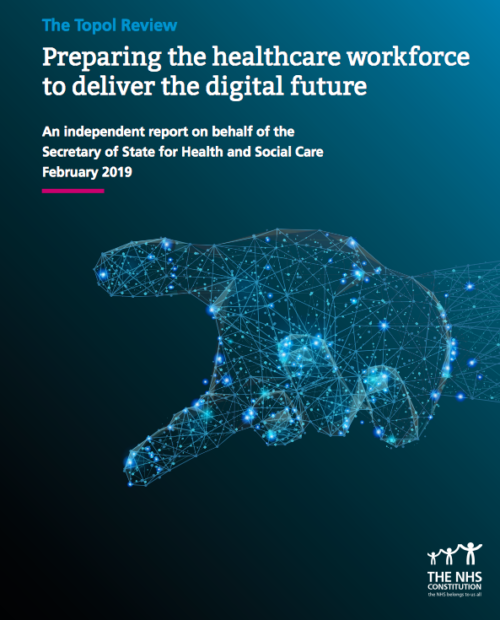 In the report, genomics, digital medicine and artificial intelligence were all seen to have a major potential impact on patient care, but it also showed how digital will help improve the lives of the NHS workforce. There was a helpful introduction to a number of emerging technologies, including low-cost sequencing technology, telemedicine, smartphone apps, biosensors for remote diagnosis and monitoring, speech recognition and automated image interpretation, that are seen to be particularly important for the healthcare workers.

Topol also finally puts to rest dated concerns that technology exists to replace people working in healthcare. The report clearly responds to this fear confirming that technology is intended to ‘augment’ healthcare professionals, rather than replace; releasing more time to care for direct patient care. Whilst, some professions will be more affected than others,Topol finds that the ‘impact on patient outcomes should in all cases be positive’.

At the HIN we have been supporting the development of the NHS workforce as a necessary part of the journey to digital transformation. I was pleased that Health Education England’s involvement in the Topol Report means that training and education will be modernised, as it is still very dated both in its methods of delivery and syllabus. However, this education should not focus solely on just educating new NHS staff members – but we should also be digitally upskilling the workforce we have now, and at every level. And herein lies the real complexity of the digital revolution. What Topol finds undeniable is that the roles of healthcare staff will change and new skills will be required, and it is good to see Health Education England responding to this challenge – although, it was shocking to learn that radiologist are still be taught how to develop traditional x-ray films, despite them rarely being used in the NHS!

Learning from previous changes, implementation will require investment in people as well as technology. It bodes well for the exciting wide-ranging programmes of the AHSNs, that support a learning environment, understand the enablers of change and create a culture of innovation. Programmes of ours like the Graduates Into Health Fast Track IM&T programme and the DigitalHealth.London NHS Digital Pioneers programme will play an important role in developing an agile and empowered workforce to facilitate the introduction of the new these new technologies. The report is clear that it is an exciting time for the NHS to benefit and capitalise on technological advances, and the AHSNs are well place to support this. The observation that ‘within 20 years, 90% of all jobs in the NHS will require some element of digital skills, illustrates the need for digital education revolution perfectly, even if it did raise the question what would the 10% be doing!

Enjoy this blog? Then we think you’d also like:

New report maps the MedTech landscape for innovators in England

Going digital: What it’s like for less tech savvy communities to use healthcare services 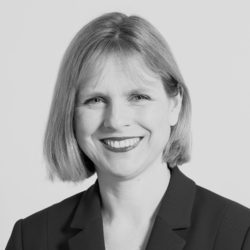 About the author
Anna has been Commercial Director at the Health Innovation Network since July 2013. Prior to her current role Anna was the Commercial Programme Director at the London Commercial Support Unit (Commissioning Support for London, NHS London and NHS Trust Development Authority).