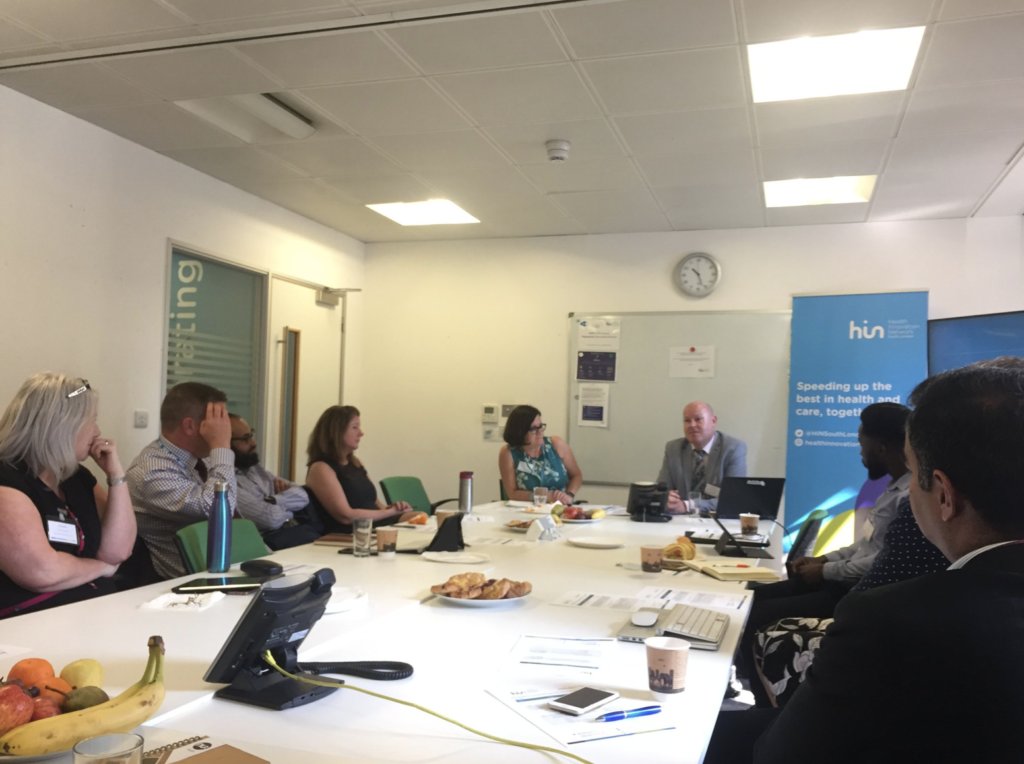 World Mental Health Day: A story of a burning platform for change

A burning platform for change

Today is World Mental Health Day; a day observed by over 150 countries globally to raise awareness and reduce stigma around mental health. In the 17 years since the day was first conceived, society has come a long way in its understanding of mental health. However, even today, people with serious mental illness are still likely to die approximately 15-20 years earlier than other people.

So this World Mental Health Day we would like to highlight some of the incredible progress being made by mental health teams around the world, to bring about parity of esteem in this area by reflecting on a recent roundtable event we held to share learning internationally, where Martin Davis, a Clinical Nurse from New South Wales’ Mental Health Emergency Care division (MHEC), presented on the successful implementation of a virtual consultation system in a rural and remote mental health setting in Australia.

This is a story of a small team that led the way. MHEC was kick started by a government cash injection at a time when the team needed to deliver a better, more cost-effective system of care to its rural and remote population in rural Australia. Before the MHEC service was introduced remote and rural ambulances (and often other emergency services) were transporting patients hundreds of miles just for an acute mental health assessment; taking them from the comfort of their home, family and friends when they were in a vulnerable state, and often leaving their hometown without any emergency provision. Imagine living somewhere where if there was a fire, there would be no one to put it out, simply because they are effectively acting as a patient taxi? Their situation provided a clear rationale for change – a burning platform, if you will. By using virtual consultations, they could save time, save money and deliver faster patient care.

Starting with an 1-800 number 12 years ago and progressing to an online video system just under a decade ago, MHEC now prides itself on answering calls within three rings, and being able to assess patients on a video call within an hour during daytime hours. The stats continue. Every year since its inception, they have saved the combined services over $1,000,000 AUD a year; and 80% of the patients they see are discharged back into their community within a day, a direct reversal of the 20% of patients who were able to go home under the previous system.

Despite the obvious differences between MHEC’s setting (their ‘patch’ is the size of Germany but has only 320,000 residents), and our urban south London area where almost three million people reside in an area a fraction of the size, when Martin shared his story the similarities were immediately apparent. In London we have a diverse population who speak an estimated 250 languages, requiring a need for numerous cultural sensitivities; the MHEC team have a large aboriginal population – almost 40% of their mental health in-patients identify as aboriginal.

Patients in New South Wales were having to travel miles away from their families to receive acute mental health care; we too have examples of this happening in acute mental health care in the UK, and while the distances in Australia may be greater, the impact on the patient and their family will be the same. The Australian health system also faces an increasing demand for acute mental services against a backdrop of challenges with staff recruitment; turns out, Julia Roberts had it right in Pretty Woman; it is “all just geography”.

The question our roundtable guests discussed cut to the heart of the complexities of digital transformation: if we have so much in common, why, over a decade later, are we still not embracing virtual consultations in the same way that they are? Distance and cost were MHEC’s burning platform, pushing them to make changes ten years ago that other services are only just catching up with. We seemingly are yet to find our burning platform, despite the pressures on our services and the progress being made in many areas.

As our roundtable participants moved the discussion on to the inevitable complexities of implementation, many of the usual barriers made an appearance; procurement, interoperability, money, time. But a few more situation-specific ones also livened the debate; what are the implications for information governance? How do you prevent reprisals of misdiagnosis? How do you train people to deliver virtual care? How do you ensure that changing a pathway won’t affect patient safety? How do you empower your teams to step outside their role? How do you get buy-in from all the organisations needed to deliver the change?

The need for systems to talk

For Martin – and MHEC – all the barriers to change raised were not only a stark reminder of how far they have come, but also how much work is still to be done. We delved into the extensive stakeholder engagement the MHEC team undertook (they visited all the GP practises in person because face-to-face meetings achieved better buy in from clinicians – an irony that wasn’t wasted on them), and listened to how the accountability process was redefined, before unveiling a key area of distinction between our two situations; how joined up their IT systems had become. A steely silence answered Martin’s assumption that we’d managed to fix the interoperability of medical records in the 20 years since he’d served at Homerton, Enfield and the Royal Free. Sadly, Martin, we have not but it is high on the agenda of NHSX and others so perhaps this time we will.

And therein lies part of the problem. The collaborative nature required to implement the MHEC system between mental health, emergency departments, General Practitioners, community mental health teams and even the police (they have supplied local police with digital tablets to ensure they can get the virtual consultations to people in their own homes, not just the local emergency department) is a testament to the power of joined-up care systems, but working together was undoubtedly made simpler by the support of a joined up technology system, something the various LHRCEs are still working hard to crack.

From the discussion, it became clear however that no one issue of technology, procurement, change management, organisational boundaries or geography on its own poses enough of a barrier, but the cumulative effect of them all risks putting off too many commissioners, clinicians and managers from implementing digital transformation. The risk made all the more terrifying by the fear that it might go wrong and that safety could be compromised.

Martin was incredibly open and forthcoming about the fact that MHEC is not yet perfect. When they started the technology didn’t work; not everyone was bought in to the system; it was not – and still isn’t – an overnight success, but none of that mattered. They were trying something new that, at its heart, was trying to improve patient care and support emergency services to deliver better support to people in a mental health crisis, whilst also saving the overall system money. It is clear that really innovative organisations are willing to tolerate failure and see it as an opportunity for learning and doing things even better. Whilst we can’t tolerate failure in terms of compromising patient safety, it does feel that perhaps sometimes this fear also stops us from implementing proven innovations. So why does the fact that something won’t work perfectly first-time round make us in the NHS feel so uncomfortable? Perhaps this is our inherent fear of failure?

We heard from some present about the fabulous work they are doing to implement similar technology and different ways of working, however, to really impact care we need to do this at scale. And to achieve anything at scale, risks will have to be taken. Perhaps our burning platform is just not hot enough. Yet.

About the author
Breid O’Brien leads HIN’s digital consultancy function. She has extensive improvement and digital transformation experience supported by a clinical and operational management background in acute care within the UK and Australia. She has supported major system level change and has a strong track record of delivering complex programmes of work whilst supporting collaboration across varied teams and organisations. With a Masters in Nursing, an MSc in Healthcare Informatics and as an IHI improvement Advisor, Breid is especially interested in the people, process and technology interface.